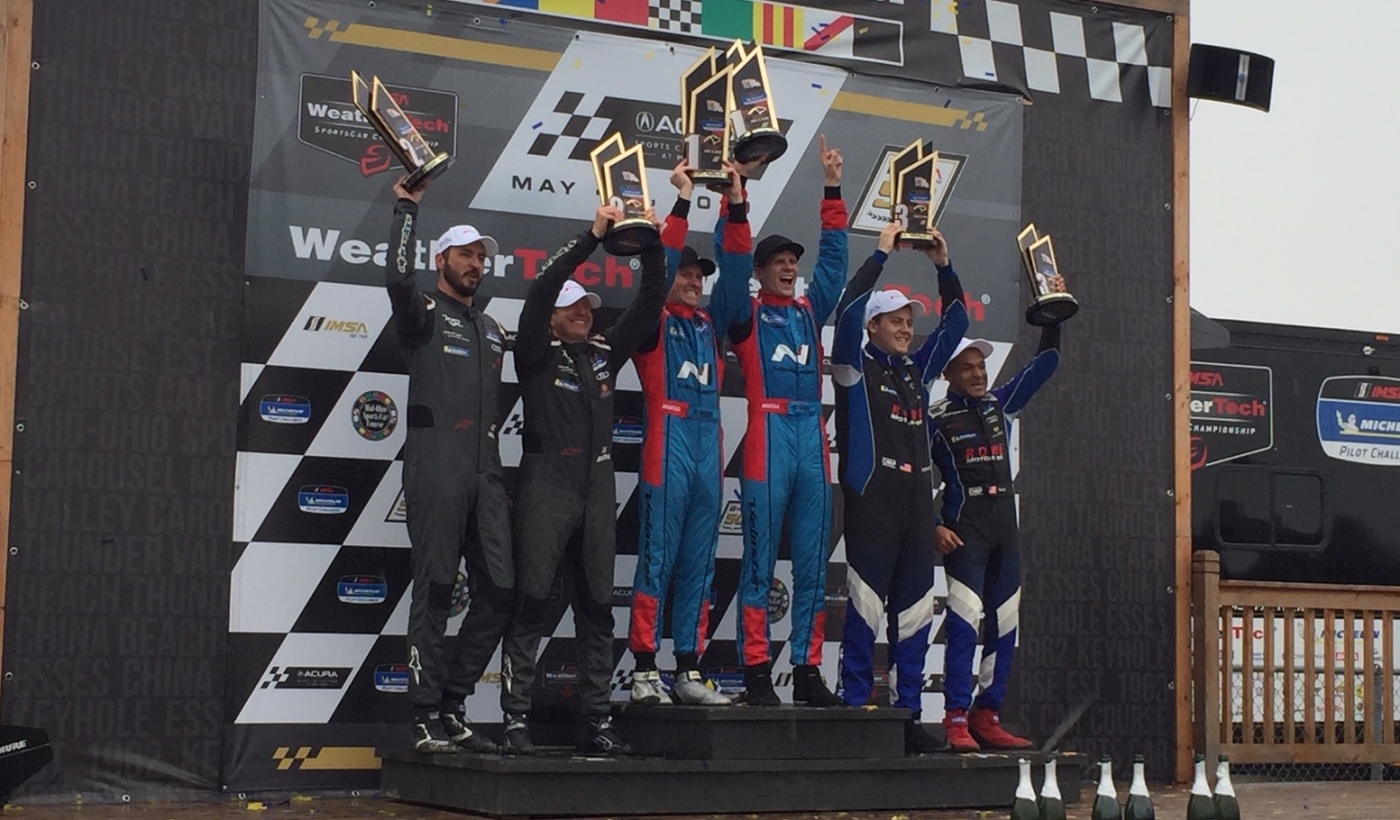 LEXINGTON, OH – After a rocky and frustrating start to the 2019 season, things finally turned around for Roadshagger Racing this weekend as they scored their first professional podium with a dramatic second place finish. The good result jumps the team to 6th in the points standings and gives the season a whole new outlook.

The team started the weekend with a new engine in the Simply Vegas sponsored Audi, after finally determining the gremlin that had haunted them at the first two races was not repairable. TCR regulations mandate that the engines remain sealed after they are received from the manufacturer, meaning the team can not open them up to make performance enhancements or even repairs. Thankfully, the new engine ran perfectly all weekend, finally giving Gavin Ernstone and Jon Morley a chance to show what they could do.

Ernstone started the race in 8th place, but fell back to 10th in the chaotic early laps while the TCR field tried to work their way through the GS backmarkers. As his run went on, Ernstone got quicker and quicker and started picking up positions. Ultimately, he was able to get the car all the way up to 6th place before bringing it into the pits for a driver change.

There were some great battles out there and I knew that if I handed the car to Jon in a decent position he would get us through the field.

The team left Ernstone out for a full 70 minutes, hoping to have a little more clarity on whether wet weather tires would be required for Morley’s stint. The radar said yes, but Ernstone’s gut said no and he made the call to put on slicks.

As light rain started to spit down, Morley left pit lane on slick tires in 7th place and thankfully had a few laps to warm them up under a full course yellow. Some of the cars in front of him opted to go with wet weather tires, but the track didn’t seem quite wet enough yet for those to be an advantage.

Once the race went green, it was immediately apparent that Ernstone and the team had made the right call. Incredibly, conditions would remain about the same for the remainder of the race. The track, while still slippery, was dry enough for slicks to be the tire of choice and Morley set about cutting his way through the field.

Morley made it up to second place and had the leader squarely in his sights when the team delivered some bad news over the radio. He would need to serve a drive-through penalty for speeding in pit lane. No comment on which driver was guilty of this infraction…

Morley begrudgingly pulled into pit lane -thankfully one of the shortest pit lanes of the season- and served his drive-through penalty. In doing so, he fell back to seventh; but he was left with plenty of time left to catch and repass the cars who had gotten back by him.

Two late full-course yellows helped close the gap to the cars in front of him, but at the same time took away precious laps that would have offered up a multitude of passing opportunities. Morley drove methodically, navigating the still slick track while trying to time his runs as the TCR leaders battled with each other and a cluster of GS cars.

Morley made it back to 3rd with two laps to go and had a clear pace advantage on the two cars in front of him, who were also on slick tires. He made a few pass attempts on second place, but couldn’t quite make it stick.

Then on the final lap, the second place car (#81) went for a pass on the leader in turn 9, severely impacting both of their runs on the way to turn 11. Morley got a huge run and saw a golden opportunity in turn 11. He popped to the inside and was able to out-brake the 81 car and get fully along side by the turn-in point. In spite of a rad looking navy car being right next to him, the 81 decided to turn-in anyways and pinched Morley down to the apex curb. The cars touched and regrettably the 81 spun, ending what had been a great battle to that point. Thankfully, Morley was able to continue and take the checkered flag just behind the class leader, finishing 2nd in class and 7th overall.

The icing on the cake was that Ernstone and Morley’s teammate from the eEuroparts team was able to sneak by the 81 car as well and grab 3rd for their first podium finish of the season.

Next up for the team is Watkins Glen on June 29th. It will be Ernstone’s first time driving the track and Morley’s second, but with it being a 4-hour race there will be plenty of time to find their feet.

After such a great weekend performance by the team and new strategist Ben Kerrigan, everyone is excited to finally start a race weekend with some momentum!