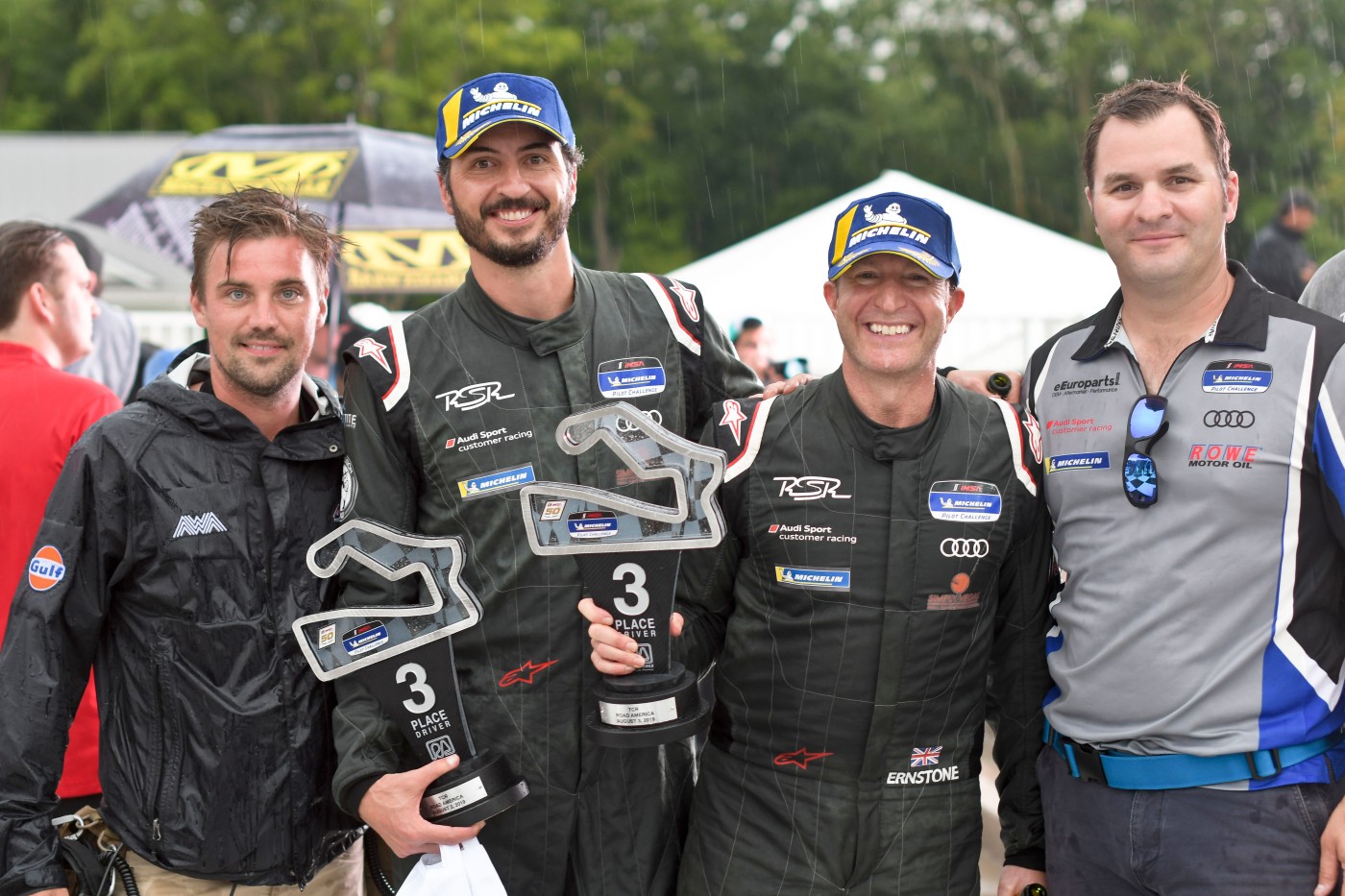 ELKHART LAKE, WI – Round 7 of the 2019 Michelin Pilot Challenge was held at Road America and the RSR crew were out for revenge after their challenging weekend at Lime Rock. They entered the weekend tied for 3rd in points, 14 points behind the championship leading #98 Hyundai.

As with most of the tracks on the schedule this year, RA was a new track for Ernstone. Thankfully there was a promoter test day this time, so he was able to get a fair number of laps around the 4-mile circuit on Thursday. As the weekend progressed, so did Ernstone, going faster with each session.

Ernstone qualified 10th out of 13 cars on a single flying lap. He decided to park the car after his flyer because he knew he could race through the cars who qualified directly ahead of him and he wanted to save his tires for the race. In the Michelin Pilot Challenge, you start the race on the same tires you qualify on.

The strategy would have paid off if things had stayed dry. But as with many of the races this year, the weather turned shortly before the race began and the team knew they were in for another wild one.

The start of the race was delayed an hour due to lightning and most of that hour was filled with heavy rain. By the time the lightning cleared up and the 10 minute call was given, the rain had stopped and the track had already begun to dry slightly. The radar showed more rain was on the way, but it was difficult to predict when it would arrive and how hard it would come down.

With no prior experience on Road America in the wet, the team decided to start Ernstone on rain tires. He quickly made the most of the decison by driving the greatest first lap of his career, charging from 10th to 5th by the end of lap one!

Ernstone continued to run quick laps and keep pace with the leaders throughout most of his stint. However towards the end of his stint, the track crossed over, meaning slick tires were now significantly faster than the old rains that Ernstone was on. The timing of this crossover gave the team an opportunity to put Morley in the car on slicks so they could keep pace with the leaders. Even that was a hard decision though as the radar looked pretty ominous.

The team performed yet another great stop and got Morley out on slicks. There was a little drizzle the first couple laps, but as that subsided Morley was able to start gaining time; running the second quickest lap of the race as he fought hard to catch the leaders.

As promised however, the rain on the horizon eventually arrived and Morley got his first taste of it in the carousel, with his car sliding wide and nearly going off the track. He went one more lap on slicks to make sure the whole track was wet before pitting for rain tires.

Once Morley got back out on track, he barely had a chance to get his tires up to temp before a full course yellow came out. This lucky break got Morley a wave-around and allowed him to partially close in on the field under yellow. He wasn’t able to fully catch the field because he was stuck behind an Alfa on slick tires. The Alfa was doing its best to catch up, but the track was fully wet at that point and he just couldn’t make up the entire 4 miles to the pace car.

Once it went green Morley quickly disposed of the Alfa and started to feel out the conditions on his rain tires. He only had one lap of trying however, before another full course yellow came out due to a crash in the kink.

The crash was quickly cleaned up by the great track crew at Road America and it was announced that there would be a one-lap shootout to the checker. This was great news for Morley, as he was mired in 8th place and the full course had enabled him to catch back up to seven cars in front of him. Five of those cars were on slick tires, with only the #23 in 7th and the #21 in 2nd running rain tires.

When the green fell on the final restart, Morley was on a mission and drove as hard as he could to try and reach the leader. He made it up to 5th by turn 5, but a failed pass attempt on the #84 Honda in turn 6 cost him valuable time. He got by the #84 in turn 8, but by then the top three had pulled a big enough gap to be just out of reach before the finish line.

Morley crossed the line in fourth, disappointed to have missed the podium, while at the same time relieved the race went green for that final lap and he hadn’t finished in 8th under yellow. A few moments later, the emotions changed dramatically inside the car.

The team came on the radio and told Morley the #89 HART Honda, which had won, would be excluded from the race for violating minimum drive time… by NINE SECONDS. HART’s loss would be Roadshagger’s gain, as this meant they were elevated to 3rd place and headed back to the podium!

In spite of recording a series-leading fourth podium, Ernstone and Morley actually fell one position in the drivers championship to fourth. The race winning #21 Hyundai moved past them into third overall. The good news however, is that they beat the #98 Hyundai and therefore closed the gap to the championship leader by a few points, paring it down from 14 to 12.

Three rounds remain and the team is now fully gelled and full of confidence. While they’ve fared well in the mixed condition races this year, everyone is hoping for a dry race next time out to have a good, old fashioned shootout for the win.